Due to the ongoing global/national alert on new variants of Covid-19 and the potential threat to the population, the Health Ministry of the Government of India have been issuing various statements and alerts on all media formats to exercise caution and restart the key self protection processes to protect oneself i.e.- wearing masks indoors/outdoors, certainly staying masked in crowded places, washing hands frequently and exercising caution & alertness at all times.

While these are not restrictions as experienced during the pandemic [ curfew/lockdown ] Vadodara Marathon advises ALL participants/spectators to ensure they exercise safe practices to self protect, and therefore also help within the community by stemming any such illnesses. VM2023 is a Ground Event and therefore this advisory is of utmost importance.

While we issue this advisory, should the Government issue any new ones in public awareness, we strongly urge that the same be followed in the interest of general safety. It is solely the runner’s responsibility to follow all the government guidelines and regulations, that may be in place at any time. All participants should comply with guidelines in relation to COVID19 advisory issued by respective union, state and/or local administrations.

It is solely the runner’s responsibility to ensure he/she is in good health and is medically fit to run the distance he/she has registered for. All or any symptoms of ill-health, including but not limited to symptoms of Coronavirus, must be referred to an authorized medical practitioner, and treated accordingly. Any runner, who has recovered from Covid-19, must get the authorization from a medical practitioner, to certify his/her health and fitness before running. It is solely the runner’s responsibility for wearing/not wearing a mask and taking other required precautions when running, as per the government regulations and medical advisories in place at the time.

VM does not accept or entertain any liabilities arising from accidents/injuries for any participant owing to his/her circumstances or conditions under which they are undertaking the run.

Team Vadodara Marathon extends their heartfelt thanks for your association with us over the now concluded VM2023 Edition. Without your active support & participation, it would not be the grand success it has been! It is only because each of you saw value in the VM organization & its mission that we have been able to deliver to our commitments and uphold the vision we had set out to achieve. While thanking you all wholeheartedly once again, we are also happy to announce that our next VM Edition is slated for 8 th January 2024 & we look forward to hosting the next edition on a grander scale than the one gone by. Thank you all and see you again soon! 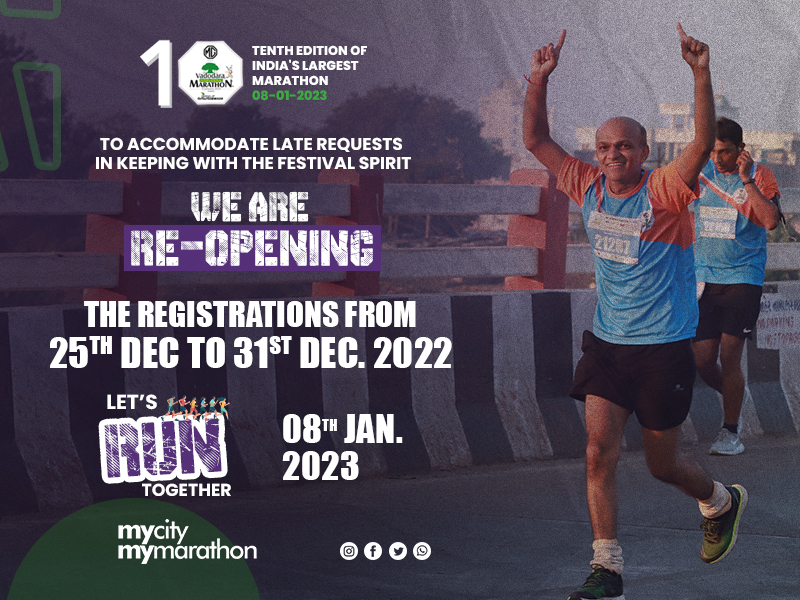 VM has celebrated the Spirit of Vadodara, as a tribute to Vadodara being recognized as one of the Top 10 “Smart Cities” of India. The 8th edition supported the causes of Organ Donation awareness, Say No to Plastics awareness (Reduce, Reuse, Recycle), and Swacchhata.

For the 7th and 8th editions, VM was a member of Vadodara Municipal Corporation’s initiative- Nirmalayam: Mission Clean and Green Vadodara campaign, to help create awareness and educate Vadodara’s citizens on Swachchata and how to keep Vadodara clean and green.

Supporting initiatives for a sustainable ecosystem and biodiversity conservation has been a focal point through many editions of Vadodara Marathon.

This edition of MGVM proudly supports the cause of Vaho Vishwamitri Abhiyan (VVA), a flagship project of Community Science Centre, for advocacy, awareness and holistic development of the river Vishwamitri. VVA plans to organize 134 km long Maha Padayatra event, from 16-23 January, to generate awareness among the civic and government authorities, as well as people living in cities and villages especially on the banks of the river.

The main objective of the Vishwamitri Maha Padayatra is to “Know Your River” aimed at generating people connect, with awareness about the river Vishwamitri:


Other causes we support

Vadodara Marathon’s motto of “Sports, Seva, Swachchata” is at the core of all the activities, supporting various social and civic causes. Vadodara Marathon, or VM, offers a platform to l NGOs and Divyang Associations to increase their visibility, raise awareness and funds for their causes.

Below is a brief of all the editions of Vadodara Marathon and the causes it supported.